Scalextric fans can pit their skills against each other and experience the world of Star Wars in a revolutionary way. One player races Luke Skywalker's X-Wing and the other controls Darth Vader's Tie Fighter as the pair accelerate along the extended figure-of-eight circuit trying to joust each other off, recreating the thrills of intergalactic duelling.

The set includes nearly 4 metres of track, including sections that glow in the dark, comprising a bridge and the use of the box to create a tunnel into the Death Star. Two skill-level hand throttles are included. These throttles are fitted with special tamper-proof skill level switches that can be set by an adult to suit the ability of the young player.

Please note: The starfighters do not race side-by-side as in standard Micro Scalextric slot racing; he extended vehicle width of the starfighters is designed for a jousting/battling game experience. 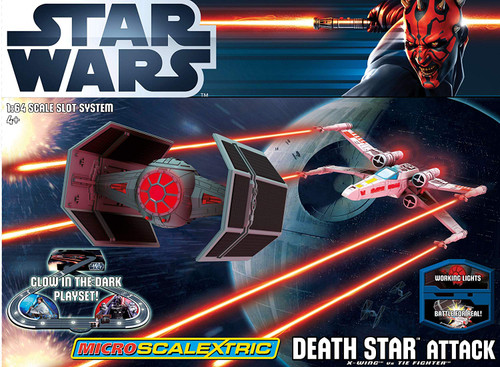