With the Great War over and German toy trains not being imported due to the bitterness towards the vanquished, Frank Hornby saw an opportunity to expand his manufacturing business into the production of toy trains and consequently in 1920 he launched Hornby Trains.

Frank Hornby’s first British made Hornby ‘0’ gauge locomotives were produced in tinplate and assembled using nuts and bolts at the Meccano Ltd. factory situated in Binns Road, Liverpool. The first locomotive design of this construction was a simple generic style 0-4-0 locomotive using a clockwork mechanism and connected to a simple 4 wheel tender.

The No.1 0-4-0 Hornby ‘0’ Gauge locomotive design featured cylinders and connecting rods, plus brass handrail knobs. Also, all variants were fitted with cylinders with the bodies having an enamelled finish.

The four liveried Hornby Train replicas, using where possible the original Frank Hornby design have been produced as close to the original model specifications as possible but in place of a clockwork mechanism a 12vDC electric motor has been fitted allowing for three rail operation.

Only 100 of these '0' Gauge highly collectable but functioning limited edition models have been exclusively produced in four liveries, reminiscent of the original tinplate locomotive produced by Frank Hornby in 1920, with each model authenticated by an individually signed and numbered certificate.

Collectors who order more than one design of these limited-edition products will receive the matching certificate number for each item making these an extra special addition to your highly exclusive collection.  Serious collectors would be proud to own all four of these amazing collector pieces.

Please note: These locomotives are '0' Gauge. 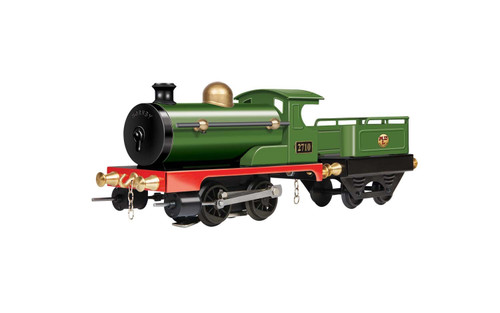