Faced with this potential competition, the Meccano Board in 1937 decided to introduce their own system but due to scale versus mechanical size restrictions they could not quite produce an ‘H0’ system but opted for a slightly larger scale which was given the name ‘Dublo’ by Meccano’s Commercial Director. The Hornby Dublo scale used more or less the same wheel back to back measurements of the ‘H0’ system but generally speaking all other dimensions were increased by 0.5mm.

By 1938 the first adverts started to appear promoting the new Hornby Dublo system. Two locomotives were initially produced one of which was a generic 0-6-2 freight model and available with GWR, LNER, LMS or SR markings while the other featured the LNER Class A4, ‘Sir Nigel Gresley’. These two locomotives were available with either a clockwork mechanism or a 12vDC motor and both featured in individual train sets where they shared a common pack.

This celebratory set goes some way to replicating the first Hornby Dublo 1938 passenger train set. The stunning and heavily detailed LNER Class A4, ‘Sir Nigel Gresley’ illustrates how the design and scale integrity of model production has developed over the years. Similarly, the Gresley teak effect coaches that are of a different type to those produced in 1938 show the amazing advances in model production since the launch of Hornby Dublo’s 1938 train sets.

This limited edition of 1000 Hornby Dublo ‘Sir Nigel Gresley’ train set forms part of the Hornby Trains Centenary group of products and celebrates the 1930s decade by using artwork inspired by the Hornby Dublo packaging style of that period. Included with each set and as authentication is a numbered certificate confirming the quantity of limited edition sets produced. 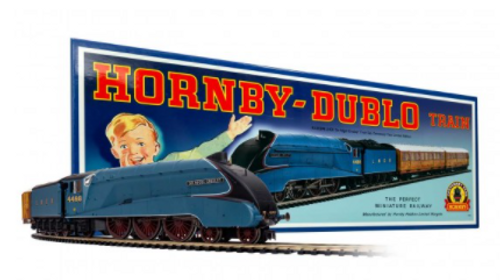