At the end of 1940 the Luftwaffe in France, despite its losses in the Battle of Britain, remained a credible and powerful force. The Allies quickly realised that in order to mount a successful retaking of the continent they would need total air superiority over the Luftwaffe.

In order to achieve this they began by using fighter bombers, attacking communication targets, airfields, and other targets of opportunity in an effort to strangle the supply lines and forces of the enemy.  Light, medium and heavy bombers were also used, attacking enemy troop concentrations, as well as potential landing sites and again, airfields.

By June 1944, the Luftwaffe was a shadow of its former self in Northern France. During D-Day, only one strafing run was undertaken by Luftwaffe fighters, when Josef 'Pips' Priller of JG26, strafed troops on Sword Beach before beating a hasty retreat. This inconsequential attack is representative of the Luftwaffe's actions on this day, which failed to disrupt the invasion at all.

Allied fighter bombers such as the superlative Typhoon went on to take a heavy toll of German men and material throughout the campaign, especially within the Falaise pocket towards the end of August. With its powerful armament of four 20mm cannons, the Typhoon was able to pack a serious amount of firepower, with its bomb or rocket armament increasing its destructive potential.

* All measurements in mm.

Airfix Gift Sets are ideal for more advanced modellers and include glue, acrylic paints and brushes. 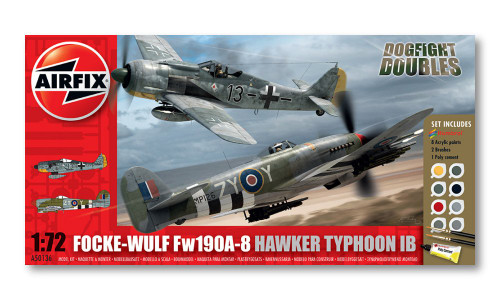