As one of the most significant aircrafts in the history of aviation, the Hawker Siddeley Harrier GR.1 was funded by both the British and US military for development regarding transitioning between forward flight and hovering. The consummate display performer is also a crowd favourite

An aircraft which is undoubtedly one of the most significant in the history of aviation, the Hawker Siddeley Harrier GR.1 was developed from the Hawker P.1127 experimental aircraft produced to test the possibilities of V/STOL vectored thrust flight. These aircraft would successfully master the transition from hovering to forward flight and back to the hover, despite several of the development aircraft suffering accidents during testing. The prospect of a viable V/STOL aircraft proved to be of great interest to both the British and US military, who funded further development of the aircraft.The new 'Jump Jet' was an instant hit with the British public, who marvelled at the ingenuity of their aviation industry, which was once again proving to be the envy of the world. As the consummate display performer, the Harrier was always a popular display item with Airshow crowds, with the two forming a bond which would last right through the Harrier's long service career. In the eyes of the British public, no Airshow was complete without a display from Britain's world leading Harrier.Entering Royal Air Force service in April 1969, the operational flexibility offered by the Harrier GR.1 ensured the aircraft would never find itself too far away from potential conflict hotspots. Not confined to operating from military airfields, Harriers could be concealed in forest clearings or dispersed to sections of motorways, or even school playgrounds, but with the intention of keeping their location concealed from the enemy. With many of these early Harriers deployed in West Germany, they would act as a significant deterrent against Eastern Bloc aggression, potentially lurking in many undisclosed locations, poised to strike against attacking Soviet armour at a moment's notice. 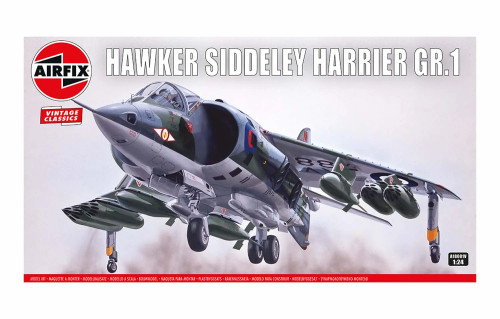