Designed by Professor Willy Messerschmitt, a director of the manufacturers Bayerische Flugzeuwerke AG, the prototype Bf109A first flew in 1935. The first major production variant, the Bf109E, was introduced into Luftwaffe service in December 1938. The E model was more powerful, better armed and armoured and by the summer of 1940, over 500 were in service for the offensive against Great Britain. By this time, the 109E had already proved to be a competent, if not the world's best, fighter aircrafts in the skies above Poland, France and the Low Countries.

The 109E became a symbol of the Luftwaffe over England during the Battle of Britain and along with the Supermarine Spitfire and Hawker Hurricane, it became one of the most famous fighter aircraft of all time. In the skies over Southern England in 1940, the 109E first had its shortcomings exposed. Its range was limited, with endurance over London being just five minutes. It was also unable to turn with either the Spitfire or the Hurricane, although its cannon armament was superior. It later served on the Eastern Front as well as over the Western Desert. 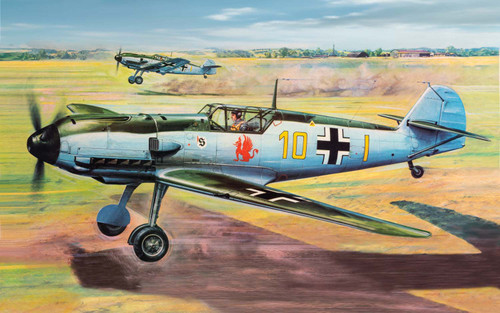