While it is the pilots that often receive the most acclaim for their role in defending the United Kingdom from the Luftwaffe during the Battle of Britain in the late summer of 1940, they could never have completed this job alone. Supporting the pilots were many more men and women across the UK who served as ground crew, performing the vital tasks of refueling, re-arming and maintaining fighter aircraft in between sorties. This was particularly hazardous task during the period of the Luftwaffe attacks and hit and run raids upon RAF airfields. In addition to refueling and re-arming Spitfires and Hurricanes with thousands of.303 rounds, these hardworking people also patched up damaged fighters, started the engines before sorties, assisted pilots to clamber into their cockpits and did their best to keep them as well maintained as they could, despite the hectic pace of the battle. Many were killed or injured during bombing raid and strafing attacks by the Luftwaffe but they carried on, both through the battle and throughout the remainder of the war, often working both in the blazing sun and freezing cold, ensuring that the RAF had the means to defend the skies of Great Britain. This kit includes: 8 x Ground Crew Figures 2 x Pilot Figures 1 Trolley Accumulator 1 x Oil Bowser 1 x Ammunition Trolley Wheel Chock and Miscellaneous Support Equipment Humbrol Enamel paints for the kit's primary decal scheme (Paints not included): Shade 11- Silver AA120 Shade 26- Khaki AA0285 Shade 33- Black AA0360 Shade 53- Gunmetal AA0583 Shade 54- Brass AA0597 Shade 61- Flesh AA0669 Shade 62- Leather AA0672 Shade 65- Aircraft Blue AA0727 Shade 72- Khaki Drill AA0792 Shade 80-Grass Green AA0881 Shade 86- Light Olive AA0953 Shade 93- Desert Yellow AA1033 Shade 96- RAF Blue AA1064 Shade 103- Cream AA1136 Shade 110- Natural Wood AA1211 Shade 121- Pale Stone AA01331 Shade 154- Insignia Yellow AA01674 Shade 159- Khaki Drab AA01729 Shade 186- Brown AA6224 Shade 12- Copper AA0134. 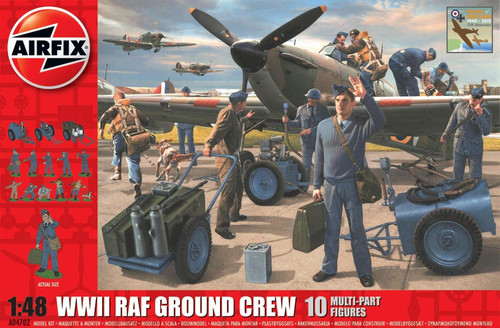