The James Bond films have always mixed a flair for the dramatic with an interesting look at technology surrounding the equipment (kit) used by Bond as well as his adversaries. (Way) Back in the days of Sean Connery as the famous 007, his fifth film 'You Only Live Twice' featured an innovative portable combat aircraft nicknamed 'Little Nellie'. This was an autogyro that could be quickly assembled in the field and was armed to the gills with guided missiles, flame throwers, machine guns, rocket pods, and more.

Little Nellie would turn out to be a combat aircraft way ahead of its time. Given the serious direction the UK government is taking with climate change and the implementation of carbon offsets, Little Nellie represents the future, environmentally friendly, helicopter that require the fewest carbon offsets to operate. Rumor has it that the Soviet Union's Mil OKB even considered a 'green' attack helicopter based on Little Nellie, dubbed the Mi-1/24, but the effort was cancelled for the full-up Mi-24 Hind instead.

In real life, the autogyro featured in the Bond film is actually a Wallis WA-116 Autogyro, developed by Wing Commander K.H. Wallis and actually evaluated by the British Army in the early 1960s.

Here is another of Airfix's classic kits back on the market. The James Bond Autogyro was an interesting departure from the normal fare of kit subjects from Airfix (way back then) and it was also presented in an odd scale as well - 1/24. Thank the plastic deities for this as anything smaller than 1/24 scale would have required a microscope for assembly. Needless to say, even in 1/24, the airframe of Little Nellie is a little over six inches, and the basic Wallis was even shorter.

Molded in light gray styrene, the kit is presented on seven parts trees, plus a single clear windscreen. Most of the parts used in the build are the various weapons and fixtures used to replicate 'Little Nellie' as the basic autogyro is far less complex kit-wise (and in real life).

The kit comes with an optional pilot figure representing Bond wearing the unique flying helmet developed for the film. To keep things somewhat interesting, Airfix rigged the two forward-firing rocket pods to have triggers that release projectiles There are no springs in the mechanisms, so you won't be able to shoot anyone, but they should gravity drop on command (if you're so inclined).

Markings are provided for two examples: 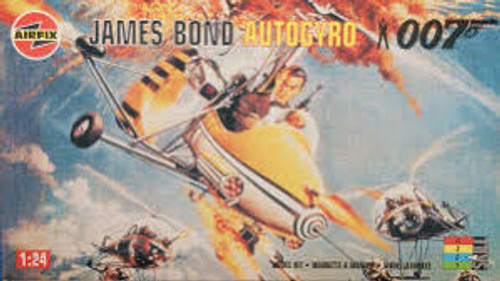