HMS Victorious joined the Home Fleet on commissioning in May 1941 and just nine days later her pilots encountered and attacked the German battleship Bismarck. On 26 May 1941, the new carrier HMS Victorious whose aircrews, despite their inexperience, succeeded in putting a torpedo into the battleship's midship section, which opened up a fuel tank on the Bismarck.

After the sinking of the Bismarck, HMS Victorious continued to operate with the Home Fleet, Victorious's Fairey Albacore aircraft were subsequently involved in an attack on the German battleship Tirpitz in March 1942. She provided cover for Russian convoys PQ-15 and PQ-17 in May and June 1942 respectively. She then participated in Operation Pedestal and then went on to take part in the North African landings at the end of 1942. HMS Victorious sailed to Pearl Harbor to join USS Saratoga's Battle Group, Task Force 14. She arrived and took up duties under Task Force 14 in the the Southwest Pacific on 17th May 1943. She embarked US aircraft and aircrew, and with the Saratoga swept the Solomon Islands.

During that year this busy ship supported the US Pacific fleet on many operations usually carrying both British and US Wildcat fighters. HMS Victorious covered Russian convoys from January-March 1944, then took part in Operation "Tungsten" air strike against the German battleship Tirpitz on 3 April 1944. After another refit she joined the British Eastern Fleet enroute to the Far East. In July 1944, she led a strike against Palembang with HMS Illustrious, then on 25th July she led a strike against the Andaman Islands with HMS Indomitable. In October 1944, she was assigned to the British Pacific Fleet, serving in some of the final hard-fought operations at the end of the war. 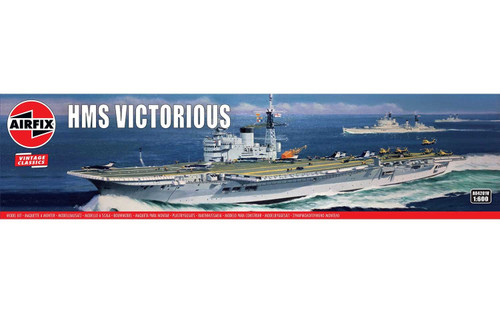